On 8 October 2018, a ceremonial swearing-in of Brett Kavanaugh as an Associate Supreme Court Justice was held in the East Room of the White House. After the ceremony was completed, there was an interesting exchange which occurred between retired Associate Justice Anthony Kennedy and President Trump. What follows is a nonverbal analysis of that exchange. 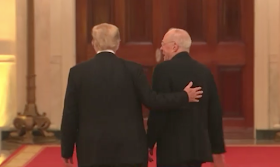 Note that as Trump and Kennedy exit the East Room (beginning at about 30:01 in the above video), as they're walking down the hallway, Trump momentarily touches with his finger-splayed right hand in the upper center portion of Kennedy's back (30:27 - 30:28).

President Trump exhibits this particular behavior extremely often. It's not in any way a display of affection or friendship - nor is it because Kennedy needs any assistance in walking (he doesn't) - rather this is Trump displaying dominance. 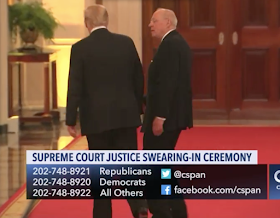 As they turn to their left, during 30:29, Justice Kennedy suddenly stops - epitomizing the nonverbal idioms of 'stopping in his tracks' and he's 'taken aback' - and with both of his feet planted, his torso recoils, tilting backward, as he suddenly pulls away from President Trump. 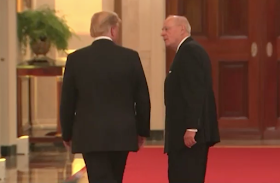 Kennedy then leans slightly forward, particularly with his head and neck, in a moment of anger and assertiveness (30:30). 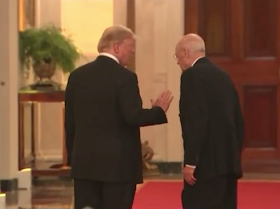 As Trump attempts to calm Kennedy (30:32) with his dominant, palm-down gesture, Kennedy looks down to his right. This is the quadrant to which most people look in momentary reflection during high-emotional times (such as sadness, guilt, shame, regret, what-am-I-going-to-do-now?, and similar feelings). During 30:31, we see Kennedy's mouth momentarily agape - displaying persisting shock and disbelief. Notice too, that the justice's jaw is retracted - which, although not required, serves to amplify Kennedy's emotions. 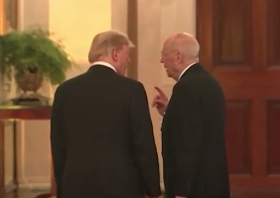 Kennedy then reasserts himself with Trump (30:34 - 30:37) with a finger-point hand-chop. This is indicative of Kennedy's feelings of anger and self-righteousness - and it's one of the few times you'll see this body language displayed in this, or any president's personal space (intimate space).

Summary: While we don't know what President Trump said to retired Associate Supreme Court Justice Anthony Kennedy, we can be absolutely sure it has profound ramifications. Kennedy was taken aback/shocked. The justice then grew self-righteous and angry. This nonverbal exchange is highly-consistent with Kennedy believing that a promise had been broken.

Body Language Analysis No. 4273: Natalia Veselnitskaya and The Trump Tower Meeting - "I am an Informant"

Body Language Analysis No. 4246: Former senior KGB spy - says he was warned that Sergei Skripal and his daughter were in danger