George Zimmerman's attorney, Mark O'Mara was in court today, along with John Guy, the assistant D.A. Zimmerman stands accused of second degree murder in the death of Trayvon Martin. What follows is an analysis of some of the body language O'Mara displayed. 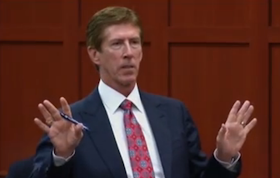 Any attorney should be extremely cautious about using certain gestures (illustrators) in court. This is of course particularly important when facing towards or speaking to the judge. Here, O'Mara displays a palms-up/fingers open toward the judge. It is also at shoulder level - which is relatively high. While his fingers-open configuration down-regulates this somewhat, such a gesture is hyper-alpha and dismissive. There are of course times any attorney should dial up his/her alpha - but directing such emotion at the judge will offend and destroy rapport. The higher this and many other gestures are held, the greater the amplitude. O'Mara may very well direct this towards opposing counsel, certain witnesses, or Trayvon Martin if he were alive, etc. 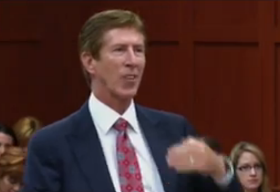 During the 0:54 segment, O'Mara displays a clear duping delight. Many are difficult to see and much more evanescent. Although it still lasted less than one second and was a near microexpression - this example of a duping delight is considerably more obvious than many. It indicates that O'Mara believes Trayvon Martin was not the aggressor. This is a freshman mistake and yet a very human one. 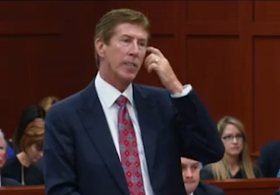 A few seconds later at 0:59, O'Mara scratches just lateral to his left eye on the anterior aspect of his temple as he speaks about attributing aggressive behavior to Trayvon Martin's marijuana use several hours prior to his death.

This example of a facial MAP (Manipulator, Adaptor, Pacifier) indicates that O'Mara does not believe his own statement regarding the assertion between violence and marijuana use. 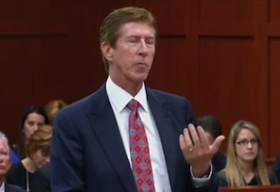 The near-eye scratch above stands on its own, however a few seconds prior, Mr. O'Mara demonstrates transient increased blinking rate with mild prolonged lid closure. This cluster context is consistent with anxiety

In addition and well exampled here, is Mark O'Mara's "beta elbow configuration". He displayed this demure posture far too often throughout this video. When the elbow is held too close to the side of the torso during arm and hand illustrators - it indicates a lower degree of confidence. With some men this nonverbal behavior is not only scenario specific - it's used chronically. Of course the elbows should not be held too far away from the body - and any display of confidence can be over-alpha and thus can backfire (e.g., as above when he directs his palms toward the judge).

Whether in the courtroom, in a sales setting or in the midst of a negotiation, etc., striking the right, context-specific balance of alpha and beta - and the ability to know when to dial it up or dial it down is very crucial. When is the last time you destroyed rapport and didn't realize it?

Analysis # 1697: George Zimmerman in Shackles - How does this Alter His Body Language, Testimony and Our Perception?

Nonverbal Communication Analysis # 2400:  One Way Deception be Minimized in the Court Room -  O.J. Simpson's in Court